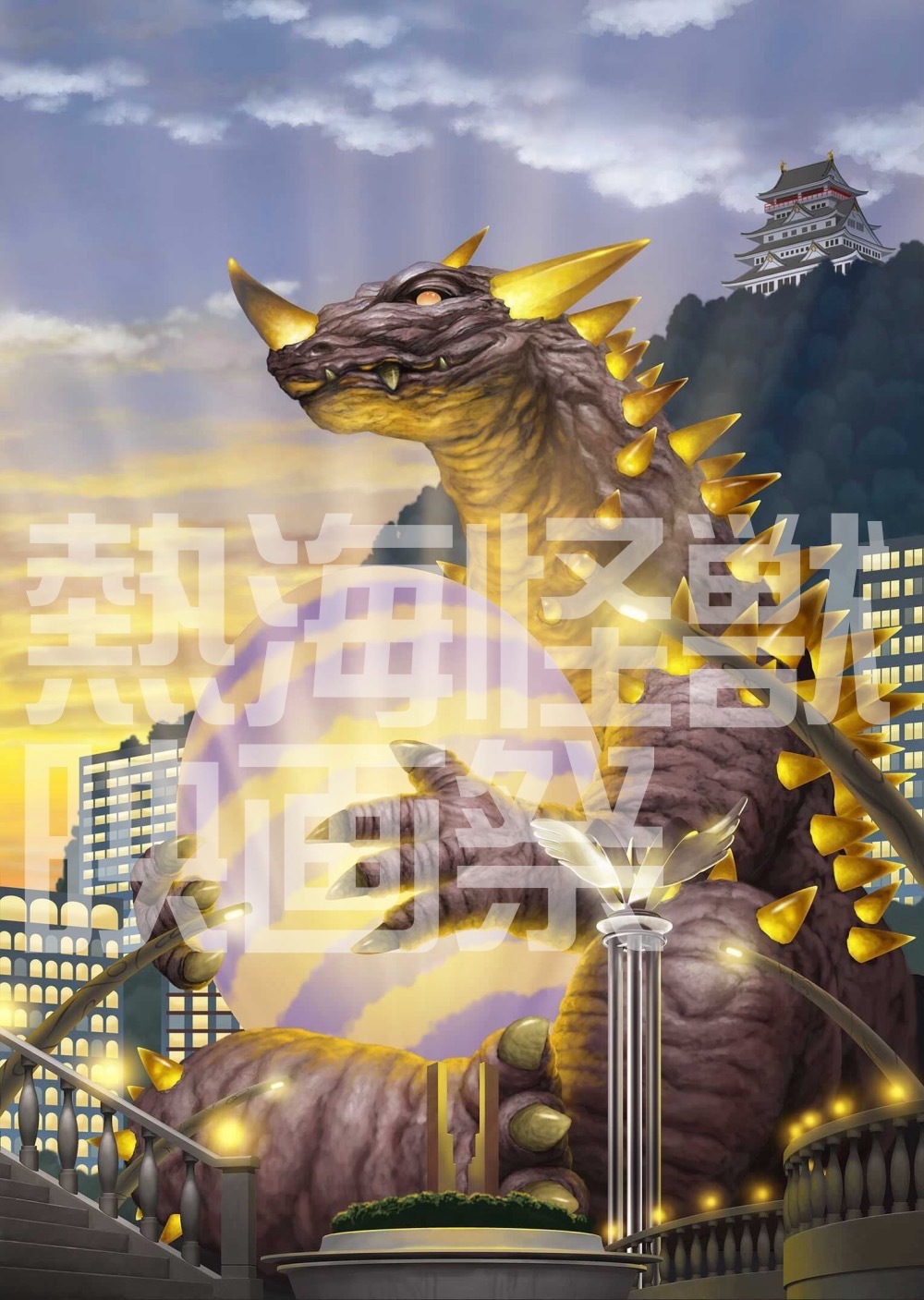 While the coronavirus was spreading around Japan, the Izusan debris flow disaster also occurred in the city of Atami, which caused much hardship. Every day I have been asking myself whether or not it is best to hold the Atami Kaiju Film Festival this year. Even now, many events are being canceled one after another around the country. However, I don’t think we can afford to stay in such a negative situation forever.

We decided to hold the 4th Annual Atami Kaiju Film Festival in November as planned, hoping that by doing so we could show the strength and energy of the city of Atami through our efforts. A portion of the proceeds from the festival will be donated to support the reconstruction efforts from the disaster . Also this time, in addition to the three-day movie screening, we will set up an exhibition and sales booth for monster creators, which will be our first attempt at promoting activities of this kind.

We also asked Yuji Kaida, a famous “monster painter” who was well-received for the design work he created for the 2nd and 3rd annual festivals, to create a main visual for the 4th festival as well. The idea for this visual was to have a monster facing straight at the camera, with Atami City in the background. This monster is standing up to protect Atami from outside threats, and he is a powerful symbol in these trying times for the positive goals we are trying to accomplish.

The Atami Kaiju Film Festival also will participate in the Atami Arts Festival with the support of the Arts Council of Shizuoka. As an event in our lovely city that takes place in the beautiful autumn time, we intend to communicate the awesome energy and beauty of Atami to the whole country! A donation box has been set up at the venue, so if your financial situation allows you to do so, please consider donating to the reconstruction efforts going on at this time.

A participant in the Atami Arts Festival

* Please note that the schedule of the festival is subject to change without notice.

What is the Arts Council of Shizuoka?

The Arts Council of Shizuoka is a resident-centered creative team established with the aim to respond to social issues and revitalize the region by connecting various fields of society such as town development, tourism, international exchange, welfare, education, and industry with cultural arts, and we support activities that work towards these goals.

<Works to be Screened>

Gappa: The Triphibian Monster (AKA Monster from a Prehistoric Planet)

* Advance tickets are sold online only. Sales start from 19:00 pm on October 8th. Tickets may also be purchased at the venue on the day of the event.

* Free for children under the age of 18 living in Atami

Selected stories set in Izu from the Ultra series. Enjoy them on the big screen.

A movie depicting the production struggle of the Daiei special effects monster movie “Giant Horde Beast Nezura,” which was an ultimately canceled movie planned before “Gamera, the Giant Monster”!

This year, on the 55th anniversary of Gamera’s birth, a 4K digital restored version of one of Gamera’s greatest adventures will be screened at Atami!

A daring story which depicts the love of two monster parents for their child, Gappa—and their rampage throughout Japan! The movie also features Atami as a major location!

A project sponsored by Kiyotaka Taguchi, and featuring original short films created especially for the contest. Enjoy a variety of exciting monster movies from young creators.

How will the Japanese react when Godzilla appears in modern Japan?

On the 4th floor of the same building as the screening venue (International Tourism and Tourism College Atami), there will be an exhibition booth for special effects related stores (companies / doujin groups). Scheduled exhibition times are in parentheses. Subject to change.

・ Yuzo Oki The biggest decisive battle in my life (TBA)

There is still room available at the venue for vendors. If you are interested in exhibiting, please contact us by email. Email: info@atamikaiju.jp

* Details will be announced later. * Additional projects are planned.

Contest applications were accepted this year, starting in May! Creators from all over the world sent in their original kaiju creations under the theme “Atami,” and we received more than 200 applications—a massive increase from last year! We will exhibit selected works from among the applications. All exhibited works can be seen at the screening event venue from the 21st.

Stamp cards will be distributed to to cooperating stores in Atami City. Participants can have their cards stamped at participating locations and receive a present at the festival event venue from the 21st.

The Atami Monster Film Festival is looking for people interested in working together to create an even better festival experience! If you are interested, please contact us by email. In addition, sponsors and cooperating companies are also welcomed at any time. Please help us to make Atami a sacred place for monsters.

As the eve of the Atami Monster Film Festival approaches, we will hold the Atami Cinema Collaboration Project. The project will focus on “Movies Set in Atami” to enliven anyone’s visit to Atami. As Atami Cinema Choice, in addition to “Akari Tsumetai,” “Speak Low,” “Atami Monster,” and “In the Future That Will Never Come,” a special screening of “Atami Blues,” directed by Donald Richie will be featured—a movie which depicted Atami as it was in the 1960s. We want you to feel the charm of Atami through the scenery of Atami as depicted by various directors through short, medium-length, and feature films.